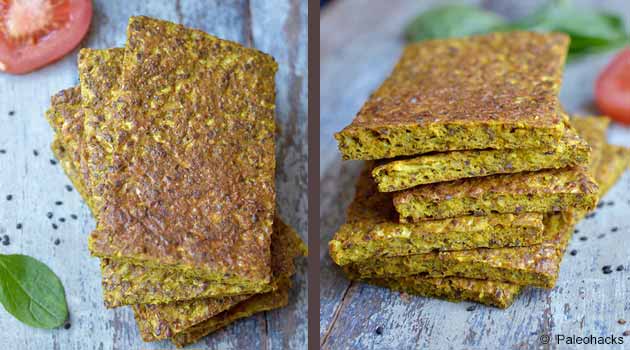 Bread is one of the world’s most ancient foods, and is enjoyed by cultures all over the world even today. It comes in different shapes and sizes, but the principle is the same — it is mainly composed of flour and baker’s yeast, a rising agent that is used to make bread fluffy when it is baked.

The flatbread, on the other hand, is a unique form of bread because it does not use the yeast, making the final product thin, similar to thin-crust pizza dough. A perfect example is the tortilla, which is primarily used in popular Mexican foods such as the quesadilla and the burrito.

But here’s a caveat: most breads and flatbreads today are made with wheat flour and similar ingredients, which are actually grains that are converted to sugar in your body, potentially wreaking havoc on your health if consumed in excess.

The great news is there are wheat flour alternatives that you can use to create delicious yet gluten-free baked goods without adding burden to your well-being, like this Golden Cauliflower Turmeric Flatbread recipe from Paleohacks.

This recipe creates gluten-free flatbread using riced cauliflower instead of flour. The final product is crispy and firm, and is great for multi-layered sandwiches, as it holds well without becoming soggy, even with the many different fillings you use.

Cauliflower as a Flour Substitute

Riced cauliflower is a great foundation for bread because it is a nutritious vegetable and contains only trace amounts of starch.1 In contrast, flour is usually made from grains, and excessive consumption of it can lead to weight gain and increased risk of diabetes.

One cup of fresh cauliflower already provides an impressive 77 percent of the daily recommended value for vitamin C, a nutrient essential for a strong immune system. Aside from that, cauliflower contains other nutrients, such as:

For men, eating cauliflower may help lower your risk of prostate cancer, thanks to its naturally occurring compounds called phenethyl isothiocyanate, according to researchers from Rutgers University.2

Turmeric is an ancient spice that has been used for countless centuries and is responsible for giving curry its bright color. In addition, it has potent anti-inflammatory qualities because of the various antioxidants found in it, most notably curcumin.

Curcumin attacks inflammation by prohibiting a molecule named “NF-κB” from entering a cell’s nucleus, preventing the cells from turning on genes that cause inflammation.3

Curcumin may even help lower your risk of cancer, according to a study published in Cancer Letters. In the study, researchers noted that curcumin has the ability to interrupt multiple cell signaling pathways pertaining to cancer, such as apoptosis, metastasis, angiogenesis and invasion. The study also noted that curcumin has been found to be effective against cancers such as leukemia, breast, ovarian, lung and gastrointestinal.4

Almond meal is basically ground almond nuts with their skins intact. This is an important thing to consider, because a lot of polyphenols (antioxidants) are concentrated on the skin, specifically phenols, flavonoids and phenolic acids. Polyphenols are known to help fight cancer cells and free radicals, reduce inflammation, promote normal blood pressure and protect your skin against ultraviolet radiation, among others.

The great thing about almonds is that you don’t have to gobble a lot of them just to get those polyphenols. According to a study in the Journal of Agricultural and Food Chemistry, just 1 ounce of almonds can provide the same antioxidant capability as 1 cup of broccoli or green tea.5 Just be sure to control your consumption, as almonds are high in protein.