Burn fat every day and every night? YES! Each recipe in the cookbook was designed by a nutritional therapist to be 100% keto AND ready in under 40 minutes! Shipped right to your door for FREE!

This article was originally published by our friends at Natural Blaze

A growing amount of anger and outrage against Monsanto has culminated in a number class action lawsuits being filed against the agrochemcial giant. At issue now are the devastating effects of dicamba, a potent herbicide formulated for genetically modified seed. The product has a tendency to drift onto neighboring crops after being applied to GM crops, destroying millions of acres of productive farmland.

Dicamba is a highly volatile herbicide with a propensity to move onto offsite locations, reducing other farmers’ yields. Farmers in Arkansas and other states are now filing lawsuits seeking compensation for losses caused by dicamba. [Source]

Already, some 3 million acres of American farmland has been impacted by the misuse of dicamba. The herbicide is intended to prevent the spread of weeds by having farmers use genetically-engineered dicamba-resistant seeds which allow the chemical to be applied in mass to large areas of farmland.

Dicamba drift occurs when a dicamba herbicide sprayed on one farmer’s crops goes airborne and floats or drifts onto another farmer’s land. This can be devastating because presumably the first farmer’s crops are dicamba-resistant, while the second farmer’s crops may not be. If this is the case, a huge swath of crops can be damaged. [Source]

Growing crisis for many farmers

A report by the Washington Post expresses the severity of this growing crisis:

The damage here in northeast Arkansas and across the Midwest — sickly soybeans, trees and other crops — has become emblematic of a deepening crisis in American agriculture.

The dicamba system, approved for use for the first time this spring, was supposed to break the cycle and guarantee weed control in soybeans and cotton. The herbicide — used in combination with a genetically modified dicamba-resistant soybean — promises better control of unwanted plants such as pigweed, which has become resistant to common weed killers.

Complaints against Monsanto and dicamba can be found in abundance on Twitter, such as this one from agronomist Paul Kassel in Iowa. 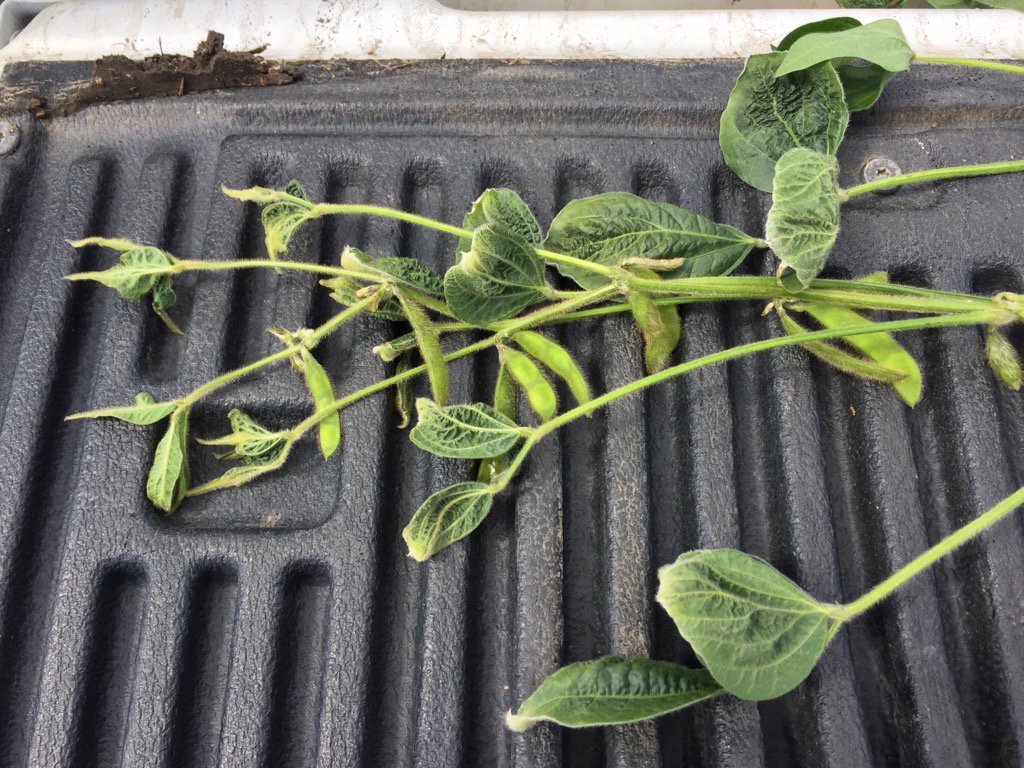 Reuters news agency produced the following video covering the issue of major crop damage occurring as a result of dicamba use.

Monsanto’s most infamous product, glyphosate, also known as Roundup, is frequently in the news for the harmful effects it has on the environment and on human health, yet dicamba is growing to become another product just as dangerous and loathed.

Dicamba is considered more toxic than glyphosate, but less toxic than 2,4-D, the third most common broadleaf herbicide. (Monsanto is working on crops that are resistant to 2,4-D, as well.) Yet when used properly, dicamba is considered only mildly toxic to people, pollinators, wildlife, and aquatic organisms. There is no scientific consensus on whether it has cancer-causing properties, though the EPA says “dicamba is not likely to be a human carcinogen.” [Source]

How do you measure the crimes of a corporation as large and omnipresent as Monsanto? Perhaps class action lawsuits are a step in the right direction.